Many promotions throughout August. Get a promotion as low as RM1.10 only at Ofiskita now. Hurry while stocks last!! 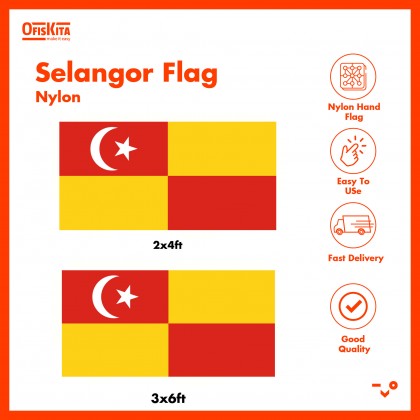 The flag of Selangor consists of four proportionally-sized sections. The upper left and lower right sections are red, while the upper right and lower left sections are yellow. The red sections symbolise bravery. The yellow sections refer to royalty, represented by the local monarchy of Selangor, and the Sultan, who is the head of the state. The official religion of Selangor is Islam, and that is denoted by the white crescent and star on the top left corner of the flag. This flag has an official ratio of 1:2, although the flag is also manufactured in 2:3 proportions with 4x6 and 6x9 foot flags being common.

The flag's design has been in use by the state government with few changes decades before Malaya's independence, the only noticeable differences of earlier iterations being the use of yellow instead of white for the crescent and star. The present flag design was adopted on 30 January 1965.